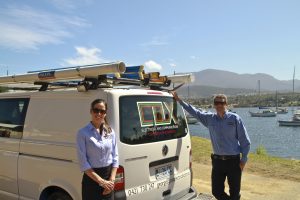 Cox Electrical and Communications began in 2014 in Hobart, Tasmania.  It is a family owned and operated business consisting of husband and wife team, George Cox (Electrician) and Jessica Cox (Admin).  After the successful beginnings of the company, George and Jessica decided to employ an apprentice in 2015.  Sam has been an excellent addition to the team and is looking forward to finishing his apprenticeship.

George started his electrical apprenticeship in 2003 with a local Tasmanian company which provided electrical and communications solutions to Tasmania’s high end commercial and executive residential developments. He completed this apprenticeship in 2006 and continued to work as a qualified electrician for the next few years. In 2012, George decided to undertake further study to obtain his Electrical Contractor’s Licence.

Together George and Jessica have made Cox Electrical and Communications a successful and reliable business.